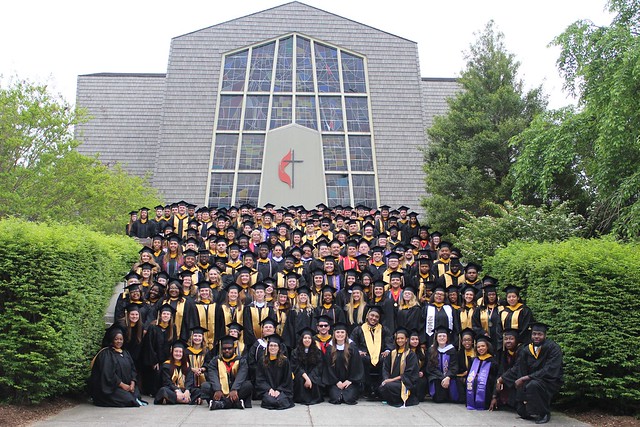 Ferrum College celebrated its 102nd graduating class on Saturday, May 5, 2018 under overcast skies in Hart International Plaza. 187 graduates received their diplomas during the commencement exercises, which included the presentation of student, faculty and alumni awards and a keynote address by Ferrum College President David Johns.

Provost Aimé Sposato opened the commencement ceremony to welcome the crowd of family, friends, faculty, and staff on hand to celebrate the graduates’ achievements. Following the invocation given by Dean of the Chapel Jan Nicholson Angle, Chair of the Ferrum College Board of Trustees Phyllis Karavatakis ’76 and Alumni Association President Ron Singleton ’70 each gave their greetings on behalf of their respective boards. Three faculty members, who will retire after 98 years of combined service to Ferrum College, were then recognized: Dr. Richard Smith, Dr. David Sulzen, and Dr. Demetri Tsanacas. The awards presentation followed.

Among the day’s award recipients was Paul L. Harris, Jr. ’65, who received the Benjamin M. Beckham Medallion, the College’s highest alumni honor. Named after the College’s first president, Dr. Benjamin M. Beckham, the Medallion is awarded to an alumnus or alumna who exemplify in an exceptional manner the Ferrum motto, “Not Self, But Others.” Harris was active in campus life, played for Colonel Bud Skeens’ first Panther tennis team, and achieved his Associates of Arts degree in 1965. He went on to receive his Bachelor of Science degree in accounting from the University of Richmond, served as a staff sergeant in the US Air Force -Virginia Air National Guard, and had an illustrious international career in business and financial management. After retiring from British Aerospace in 2000 after 25 years of service, Harris joined the Ferrum College Board of Trustees in 2000 and in 2005 became the first alumnus to be named Chair.

Next, Professor of Business Tsanacas received the Exemplary Teaching Award, which recognizes a full-time faculty member at Ferrum College who exemplifies excellence and commitment to teaching. Tsanacas, who is retiring after a 29-year career at the College, is beloved by his students, has boundless energy, enthusiasm, and spirit in the classroom, and was the dedicated advisor for the ENACTUS program.

Student award recipients included Sirena Pangelinan ’18, of Powhatan, Va., who received the Senior Academic Excellence Award, which is based on grades earned in all college courses by a full-time student, including those taken at Ferrum, as well as those received in transfer from other colleges or universities. As the top scholar in the class of 2018, Pangelinan earned a 3.9789 GPA and graduated with a B.S.W. in Social Work as well as a B.S. in Psychology.

Nashiem Bryant ’18, of Charlotte, NC, and Carroll each received an Arthur S. Owens Leadership Award, which is presented annually to the senior – this year, seniors – chosen by the faculty who best exemplifies the qualities of Arthur S. Owens: leadership, initiative, honor and outstanding character. Recipients of this award must also hold an excellent academic record, have participated in extra-curricular activities, and shown creative initiative in making Ferrum College a better place to study, work, and live.

Following the awards presentations, President Johns gave his commencement address. “You will never be fully prepared or completely ready for all the challenges and opportunities you are going to face in your life,” Johns told the graduating class. “When we finally understand there is no certain way to be ready for everything, to have enough, to know enough, we take an important step beyond being smart to being just a little wiser.”

Johns went on to advise the class to never stop learning, to act with courage, and to recognize they need one another. “I do not have all I need for all the challenges and opportunities I will face, and neither do you. But together, we can make it happen, together we have more than we need,” he said. “Stay connected…with each other, with all of us, with as many people that you can. Together you are stronger, and together you have what you need to face every challenge and opportunity that comes your way.”

After congratulating the class of 2018 and thanking them for the honor of being asked to speak, Carroll spoke to them about their shared experiences at the College. “I hope that regardless of how life unravels after you cross this stage, you will always remember your experiences at Ferrum and continue to grow from what you have learned,” she said.

A celebratory picnic lunch was held on Franklin Hall quad for all in attendance. The weekend events also included a traditional Baccalaureate service on Friday evening in Vaughn Chapel followed by a candlelight ceremony at Hart International Plaza symbolizing the light of knowledge that the new graduates will carry forth into the world. See photographs from the Baccalaureate and Candlelight Ceremony here.