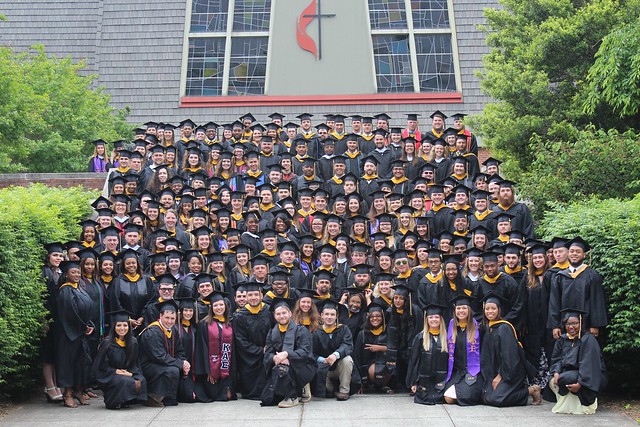 Watch the archived video of the 2017 graduation ceremony here.

Photo Specialties is the official graduation photographer for Ferrum College. Each student will receive a photo taken as they are handed their diploma. A free color proof will be sent to the student’s current mailing address, which includes a password for online viewing.

You are under no obligation to purchase prints. To receive an email notification the moment your photos are online, please visit www.photospecialties.com to pre-register. If you do not receive a proof within a week of the ceremony, please contact info@photospecialties or call 1-800-722-7033.

Ferrum College celebrated its 101st graduating class on Saturday, May 6, 2017, with cool, breezy weather in Hart International Plaza.  228 graduates received their diplomas during the commencement exercises, which included the presentation of faculty and student awards and a keynote address by Olivia Pavco-Giaccia, founder and CEO of LabCandy and an award-winning author.

Vice President of Academic Affairs Gail Summer opened the commencement ceremony to welcome the crowd of family, friends, faculty and staff on hand to celebrate the graduates’ achievements. “Commencement is always such a wonderful juxtaposition of joy and sadness.  Each year, it is with joy that we celebrate accomplishments of our graduating seniors.  But then, it is also with sadness that we send them on their way. We are certainly proud of the growth each graduating senior has experienced, and we wish them well as they move on to follow their goals. We look forward to having them back for alumni events in the future,” said Summer.

President Jody Spooner thanked those gathered in Hart Plaza for persevering the elements so that there was space to bring everyone together. “This is the Ferrum community. Each and every person who stands witness to this great moment of celebration. This is what makes our College extraordinary, this is what makes our College distinctive, this is what makes this experience exceptional. I ask that each and everyone of you who are graduating today go forward with great pride that you have contributed so much to forming and shaping this extraordinary community,” said Spooner. “I hope above all else you graduate today feeling a great honor to be part of such an extraordinary community.”

Faculty and student awards were presented next. Dave Sulzen, associate professor of accounting, received the Exemplary Teaching Award, which was established by the Division of Higher Education of the General Board of Higher Education and Ministry of the United Methodist Church to recognize one person on each United Methodist college and university campus who demonstrates excellence in teaching; civility and concern for students and colleagues; commitment to value-centered education; service to students beyond the classroom; service to the institution; and service to the community beyond the campus.

Among the students receiving awards, Anna S. Richardson ’17, of Henry, Va., received the Senior Academic Excellence Award, which is based on grades earned in all college courses by a full-time student, including those taken at Ferrum, as well as those received in transfer from other colleges or universities

Michael Gauldin ’17, of Collinsville, Va. was recognized as the student who earned the second highest G.P.A. in all college coursework, both transfer and at the College.

Brianna Carel ’17, of Palmyra, Va., and Andrew Todd ’17, of Harrisonburg, Va., were each awarded the James T. Catlin, Jr. Citizenship Award, named in honor of the late James T. Catlin, Jr. of Danville, Va., which is awarded each year to the students who have best demonstrated qualities of citizenship and general leadership ability as judged by vote of the faculty.

Following the awards presentations, President Jody Spooner introduced Olivia Pavco-Giaccia as the commencement speaker. Pavco-Giaccia, who graduated with honors from Yale University in 2016, is the founder and CEO of the social venture, LabCandy, whose mission is to focus young kids’ (especially girls’) interest in science. In her address to the students, Pavco-Giaccia spoke of the momentum of a first step, saying “At this point in our lives, we have room for steps in new and different directions, even if those steps are backwards and others are completely off the charts. That’s the beauty of first steps: it’s not about direction, it’s about momentum.”

Pavco-Giaccia went on to talk about the power of intentional listening and the importance of building a community that you are grateful for. “As young people in an increasingly divided nation, we’re often told that we need to engage with different viewpoints, but we’re given little practical advice about how to actually do so. For me, it’s been about learning how to listen. To listen to those whose experiences are not our own, to ideas and opinions that are different than what we’re comfortable with, to listen to those ways of thinking that are unpopular or laughed off by our friends. And not only to listen, but to do so intentionally, with an open heart and mind,” she said.

“As you graduate and leave behind the classrooms of Ferrum, don’t leave behind the values of this community. Embrace the motto of “not self, but others.” Make it more than a symbol of good intentions; make it a conscious part of the many choices that life will soon demand of you,” Pavco-Giaccia concluded.

After congratulating the class of 2017 and thanking them for the honor of being asked to speak, Belcher spoke to them about the importance of working hard, being honest, and caring for people. “Work as hard as you can, not because you have to but because you are able. Don’t just work hard in your career or grad school, work hard in your relationships and work hard at being honest. Work hard in every area of your life; don’t settle for mediocrity. You owe yourself more than that,” said Belcher.

“As you move forward and figure out what your next step will be, I urge you to the the advice of Frederick Buecher who said, ‘Find the place where your deep gladness meets the world’s deep hunger,’ continued Belcher, who also advised, “Find a career that brings you the most joy and helps the most people. Once you’ve found it, stay there and thrive.”

Once the bachelor degrees were awarded to the graduates, the ceremony was followed by a picnic lunch on the lawn for all in attendance. The weekend celebration also included a traditional Baccalaureate service on Friday evening in Vaughn Chapel followed by a candlelight ceremony at Hart International Plaza to symbolize the light of knowledge that the new graduates will carry forth into the world.